For the first time, Apple has issued a new human rights policy that includes a commitment to freedom of information and expression as human rights. This policy is directly linked to this campaign!

In February 2020, at Apple’s last shareholder meeting, over 40% of the company’s investors voted to support our resolution proposing Apple report annually on its policies on freedom of expression and access to information, as well as be more transparent in how it responds to requests from governments such as China to restrict certain apps.

The new human rights policy meets the first part of the resolution by publicly committing to respect freedom of information and expression as human rights but it does not go far enough in outlining the implementation of the company’s commitment and we will be continuing for Apple to do more to uphold the freedom rights of Tibetans, Uyghurs, Hongkongers, Chinese people and Southern Mongolians.

Apple has long been seen as a leader in the provision of access to the internet and as a champion of privacy and security, stating “Privacy is a fundamental human right.”

In reality, Apple enables the Chinese government’s surveillance and censorship of citizens, as well as denying people living under China’s rule access to a free and open internet.

At the request of the government of China, Apple has removed 1,000+ “virtual private networks” (VPNs) from the App Store in China, in addition to news media apps like The New York Times and Quartz.

VPNs not only allow access to information but they provide critical, safe communication channels for Tibetans, Uyghurs, and Chinese dissidents and human rights defenders working to secure basic rights and freedoms.

In October 2019, Apple removed HKmap.live; a crowdsourcing app being used by Hong Kong residents, journalists, and tourists to see where protests and police build-up are happening to allow areas to be avoided and to stay safe.

China is engaged in escalating attacks on human rights across all areas under its rule; backing the violent repression Hong Kong democracy protests, detaining at least one million Uyghur muslims in East Turkestan, inflicting widespread human rights violations in occupied Tibet, and arresting people in China who speak out about the government’s handling of the coronavirus crisis.

As consumers, concerned citizens, and members of communities in the direct line of fire, we demand Apple drop China’s censorship act and commit to upholding human dignity and political freedom.

TinTin Retweeted · TheTibetNetwork @TheTibetNetwork
18 hours ago
“This is a breakthrough moment – Tibet groups &activist partners have worked tirelessly on this campaign. This is just a first step & Apple now has to implement this policy in full & we will be watching closely to ensure it does just that.” - @MandieTibetNet
#StopAppleCensorship https://t.co/jXhCjLUr54
View on Twitter 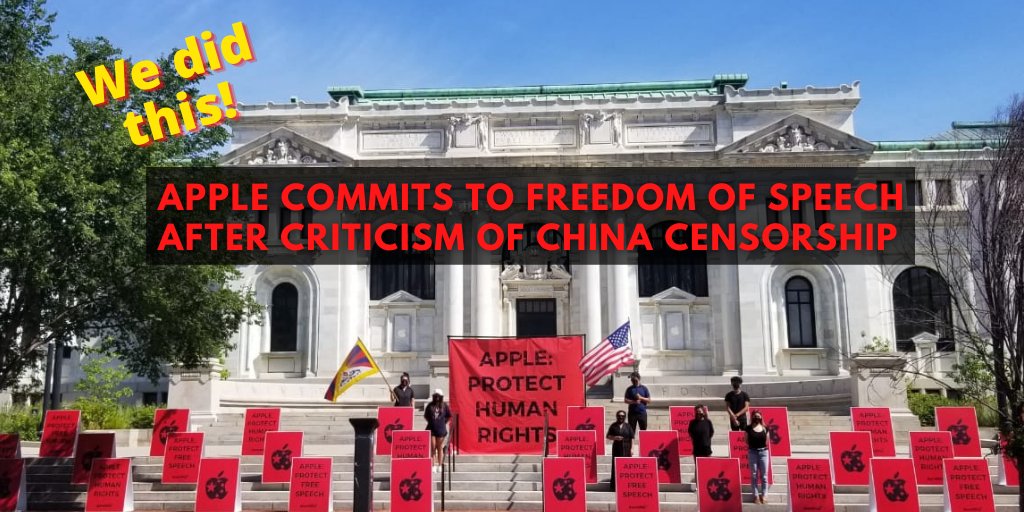 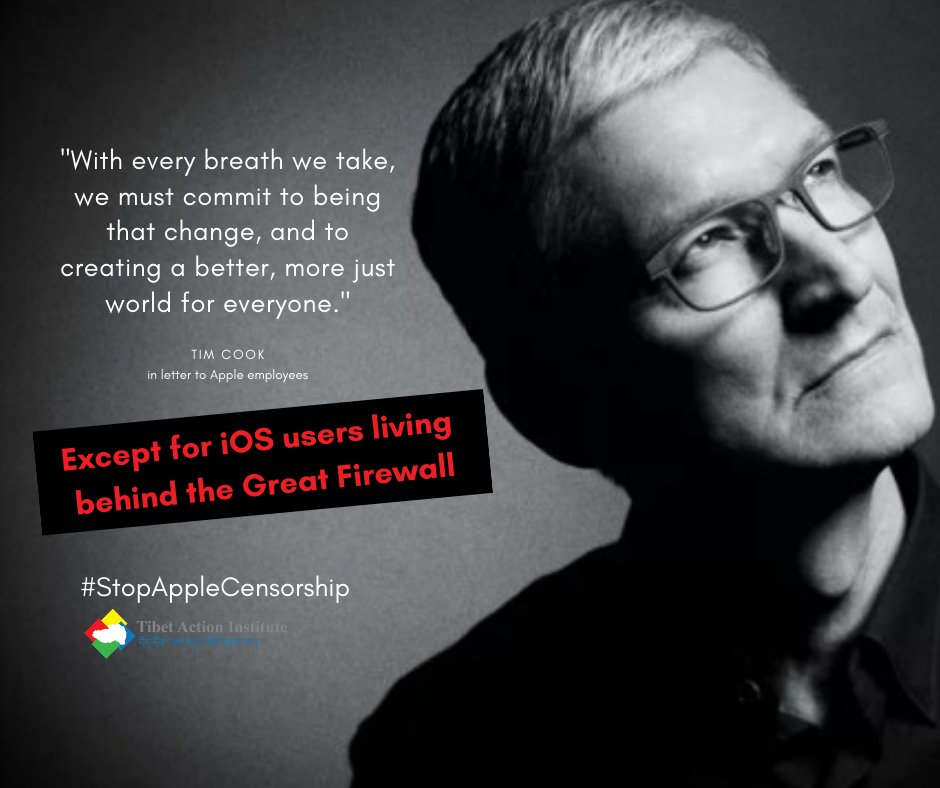 TibetActionInstitute @tibetaction
5 days ago
Apple's first-ever human rights policy is a great step forward! Let's keep the pressure on and make sure the policy=real action on freedom of information and expression for Apple users in Tibet, Hong Kong, East Turkestan, China, and elsewhere. #StopAppleCensorship https://t.co/FzkBFsOmRc
View on Twitter

Suman Kumar Retweeted · TheTibetNetwork @TheTibetNetwork
5 days ago
“This is a breakthrough moment – Tibet groups &activist partners have worked tirelessly on this campaign. This is just a first step & Apple now has to implement this policy in full & we will be watching closely to ensure it does just that.” - @MandieTibetNet
#StopAppleCensorship https://t.co/jXhCjLUr54
View on Twitter

An Apple Inc shareholder proposal critical of the company’s app removals in China received a relatively high level of support at the iPhone maker’s annual meeting on Wednesday, enough to push the company to respond, experts said.

Apple held its annual shareholders meeting earlier today, which included votes on six different proposals, comments from Tim Cook, and a question and answer session. One of the proposals was specifically critical of Apple’s cooperation with requests from the Chinese government to remove certain apps from the App Store.

Apple shareholders are set to vote on whether Apple should change its human-rights policies. They will be asked whether they want Apple to make a commitment to respect freedom of expression.

Apple removed a mapping app during the Hong Kong protests, leading to criticism that it pandered to Beijing.

Apple has found itself in a PR nightmare in recent days, with the tech giant’s troubled relationship with China thrust into an unwelcoming media spotlight.

CUPERTINO, U.S. — Apple shareholders raised concerns about the company’s compliance with the Chinese government’s censorship demands at an annual investor event on Wednesday.

Apple has faced a significant shareholder rebellion over an effort to force it to say how the company complies with government censors, as it comes under growing pressure over its role in China.

APPLE CHIEF EXECUTIVE Tim Cook has said that “companies should have values, just like people do.” He’s right. But it is difficult to champion democratic values while doing business in a country that runs on speech-stifling authoritarianism.

Apple chief said in a letter HKmap.live was ‘used maliciously to target’ officers as claim was disputed by protesters on the ground.

Students for a Free Tibet